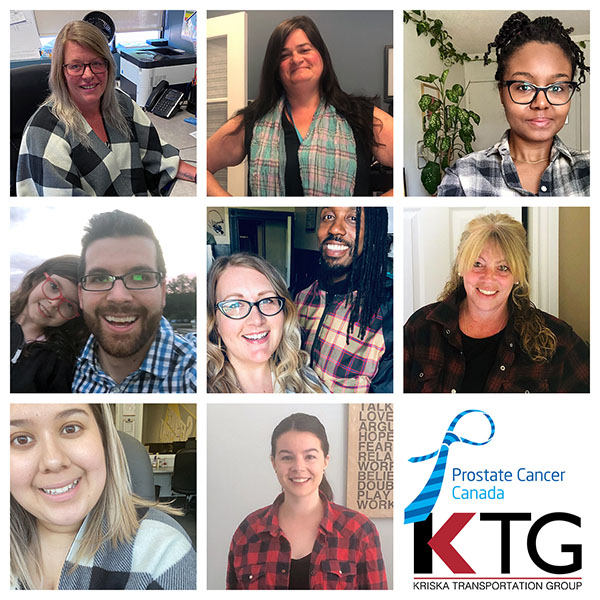 For the second consecutive year, Tandet Group of Companies of Oakville, ON was ranked the country’s second-highest workplace contributor by raising $12,522. Tandet’s fundraising efforts, which includes bake sales, potluck lunches and barbeques, dunk tanks and auctions – to name a few – spans five years.

“We recognize that the fight against prostate cancer is important, as it is a disease that affects many that all of us at Tandet care about: co-workers, fathers, brothers, spouses, partners and more” said Scott Tilley of the Tandet Group, who is “proud of what the team has been able to do in helping our industry raise over one-quarter of a million dollars over the last 5 years”.

Steed Standard Transport almost doubled its goal, and while it seemed like an odd time to raise awareness for prostate cancer, “it turned out to be a real morale booster that added some normalcy to these times” said president James Steed.

“People from all of our nine companies wore plaid this year” said Mark Seymour, president of Kriska Transportation Group, noting that this is a fun way to spread the word on the importance of testing and early detection. “With a driver population that is over 90% male and more than half over the age of 40, transportation is an industry that is particularly affected by prostate cancer”.

“The Trucks For Change Network is blessed to have a solid base of community- and charity-minded carrier members, who not only step up on a daily basis to assist with charitable freight moves across Canada, but who are also impressive leaders in important charity-based fundraisers”, said Betsy Sharples, Executive Director of Trucks For Change. “It is encouraging and heart-warming to see such a strong showing of carriers who are part of our T4C family, in the country’s top-ranked Plaid for Dad fundraisers this year”.

All Rights Reserved. Trucks for Change.
Hosted and Created by GGC Digital