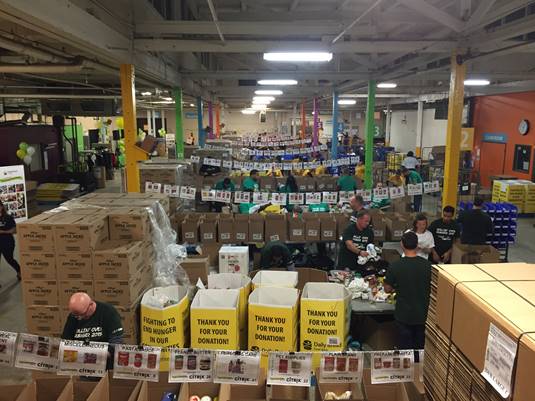 On November 18th, T4C’s first ever Food Sort Challenge Trucks was held at Toronto’s Daily Bread Food Bank. Teams from seven different carriers and industry trades “competed” by each packing 3,000 pounds of donated food for the food bank as quickly and accurately as possible. Food donations were checked for expiry dates and sorted in appropriate boxes to help those in need and teams were definitely hustling in the process. Rankings were calculated by the time taken and total weight sorted. Team Newcom Media came out on top, followed by Team Midland Transport; Team Trailer Wizards; Team Midland Courier; Team Navistar; Team Manitoulin Transport and Team Bison Transport. Overall, the seven teams sorted more than 22,000 lbs of food in just 90 minutes, while raising more than $20,000 for the Daily Bread Food Bank. The event provided a great team building opportunity for participating companies, as well as a great way to showcase the trucking industry’s commitment to its communities. We’ve already had inquiries for the event next year, so stay tuned! The Food Sort Challenge was a kickoff to our “Rolling Over Hunger” pre-holiday program in support of food banks across the country. Carriers and allied trades can still get involved by going to the Rolling Over Hunger form.

All Rights Reserved. Trucks for Change.
Hosted and Created by GGC Digital